Robin Laurence Morris, twin, was the second youngest of four children of Austin Douglas Morris and Molly Morris. A wee brother to John born on 13th July and to Jennifer, born on the 11th July. Robin and David came along on the day in between – the 12th July. So four family birthdays in three consecutive days and each would have their own cake with a different coloured icing; Robin’s was all chocolate.

The twins were not identical, but both seemed to enjoy fighting and escaping. They perfected the art of escaping from their playpens by each holding up the side while the other crawled underneath. When still toddlers they escaped their Colinton garden and were found in the railway tunnel nearby!

Robin remembered Miss Ross’s kindergarten, just along the street, before he started P1 at George Watson’s College, which was then an all-boys school. Though not academic he enjoyed sport. Rugby was one of his preferred games – albeit after two broken collarbones in quick succession he found sport with less impact was more to his style. His real forte was distance running on roads, track and cross-country.

During his early school years, there were many holidays at Gullane where the children enjoyed the beach; while their father was able to commute to Edinburgh for work at Brodies law firm. They were also able to enjoy golfing at the local courses. This was the basis of Robin’s love of the sport, which continued throughout his life. In the last two years of his ill-health golf was such a boon to his enjoyment of life.

Sadly, his father died when Robin was only nine and though the family continued to live in Colinton for a while, once John and Jennifer left home and David had joined the Army, Robin and his mother moved into town; to a large flat with beautiful views over the meadows – more golfing memories!

When he left school, Robin joined the British Linen Bank in Leith and then began his serious running. He would often train by running to or from the bank or at lunchtime. He was also given the opportunity of representing the bank at athletic meetings across the country when he was not taking part as an Octavian Harriers member. He was always best at endurance races and steeplechase was probably his best track event.

He trained at the new Meadowbank Stadium in 1970 before it was officially opened, with such well-known athletes as Dave Bedford, David Jenkins and Dave Moorcroft, and his long time good friend and golfing partner Norman Gregor.

During the 1986 Commonwealth Games he officiated again at Meadowbank; a feat repeated in Glasgow, for the 2014 Games.

Though sport has always been his first love Robin maintained that people were his meat and drink. He has even been called the “Edinburgh Tattler” because of the number of people he knew.

His parents had been founder members of the English-Speaking Union in Edinburgh, and Robin continued their interest by being on the National Committee, the branch treasurer; hosting visiting members and helping with debates. He always said he could “eat people” and loved chatting to anyone and everyone – often to the embarrassment of his wife and children. This was particularly noticeable when travelling abroad when he tried to carry on a conversation with someone who spoke no English and Robin was fluent in no other language. His usual starting point was sport – be it cricket, golf, football or even ice hockey. (They once bought a timeshare from an ex-ice hockey player because the rapport was so good).

In 1972 Robin transferred to the Bank of Scotland headquarters and was sharing flats with various athletic friends. However, when he tried to get a house purchase from the bank he was refused as he was not married!

He decided to join a bank which would allow him to invest in property and applied to Credit Lyonnais. He worked in London, Glasgow and Edinburgh and was able to buy his first flat in Westhall Gardens. He had a spare room and soon Kevin Maguire, another good athletic friend, moved in. Around this time, he met Jane Heatly (daughter of Sir Peter – more sporting connections) who introduced him to a colleague of hers: Rosalind Boyes. Roz, as she is better known, was teaching at George Watson’s College – recently amalgamated – which was a point in her favour. Although it was not love at first sight – Robin’s beard was suggested as a reason – the second meeting a year later, with Robin then minus his beard, began a friendship that ended in marriage in March 1979. He claimed that “the way to his heart was through his stomach”; Roz was Cordon Bleu trained. Two years later Wendy arrived and two years after that Suzanne made her appearance and completed the family. He has always been very proud of his doctor daughter and his teaching daughter who went to Robin’s father’s Cambridge College.

During this time Robin was still running nearly every day, but his focus now moved to Hill Running. He helped found the Scottish Hill Runners Association, the first meeting of which was held in the back of a car! He also became the winner of the first Scottish Hill Running Championship. He founded Hill Races that still occur today, produced the first Hill Running Calendars, and was the first hill running official on the Scottish Amateur Athletic Association. Ten years later he was head of UK Athletics Mountain Running, holding the post for ten years.

He was delighted to be asked to join the initial panel for choosing the inaugural and subsequent members of the Scots Sport Hall of Fame.

He always said he worked to live as a banker and lived to work at sport. When Credit Lyonnais decided to close the Edinburgh branch Robin was reassigned to London. As he did not want to move away from Edinburgh, he chose redundancy instead.

Sport was always his first love, and he was delighted to work with his friend Sandy Sutherland in Sandy’s Sports Journalism Agency. Robin specialised in fixtures and sports like skiing, handball, fencing, ladies football and ladies’ rugby.

Latterly, he worked from home for himself and was able to take on more “hobbies”, including picking up litter in Morningside Road and at St. Abbs when down at the family cottage. He took this to the next level when he organized a grand beach clear up beside the golf course at Dunbar; something that will now be an annual event known as ‘Robin’s Walk,’ aided by many of the Dunbar senior members and the local Rangers.

He was a founding member of the Eric Liddle Centre in 1988 and had been a trustee since 2012. Liddle himself had always been a hero of Robin’s and one of Robin’s many collections of memorabilia was of the Chariots of Fire hero, proudly going to the World Premiere of the film. He was also Treasurer of the Friends of the Meadows and Bruntsfield Links.

In 2000, he joined Merchiston Community Council, first as secretary then assistant chair, and ultimately chair for six years. As Robin said, “This is what happens when you go on holiday and miss a meeting. You get voted in - in abesentia”.

He did hickory golfing in plus fours and a cap. He was a member at the Royal Burgess – where he helped with the archives, started a library and (what do you know) looked after the memorabilia – and at Dunbar – now home to a collection of golfing books thanks to Robin. This became very important, as he was less able to golf.

Many holidays focused on golf – whether it was in Orkney, Aberfeldy the Algarve, or Madeira. Even those holidays where he didn’t play, he usually somehow managed a trip to the local golf club.

A friend once said that “Robin was the glue that cemented people together”. His personality made him a well-remembered figure and old school mates would often walk up to him and say “You’re Robin Morris. We were at George Watson’s College together!” This was demonstrated at the recent George Watson’s Boys’ College 50th leavers’ reunion which reunited many schoolmates and brought great pleasure to Robin. 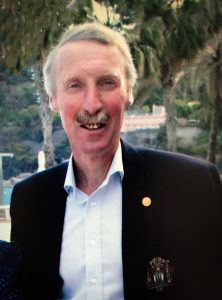 Roz and Robin were so touched by the great number of friends and family that came to visit Robin during his last few months. It was amazing to see how his visitors perked him up and gave him a new lease of life.

He had various things he wanted to do, and he managed most of them. A last holiday in Orkney, and another in Maderia. A tea at Prestonfield House where Robin and Roz had their wedding reception, and a last visit to St Abbs – their other home. The last Christmas with both girls home was truly special.

And as Robin would say; “Keep on swinging!”