Lighting candles is a lovely symbolic gesture to include in your ceremony.

Our suggestion would be to each light a candle near the start of the ceremony, symbolic of your separate lives before your marriage. After you have exchanged your vows and rings, light the third and perhaps larger or different coloured candle, by using two tapers; each taking a flame from your respective first candle and lighting the third one together; symbolising the joining together of your lives in marriage.

This makes a lovely photograph as you can see in the below photograph of George and Marie’s wedding at Mansfield Traquair in Edinburgh. 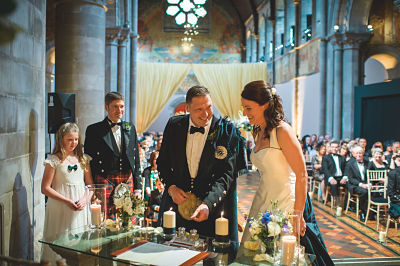 Lighting Candles during a wedding ceremony

An example of wording to accompany candle lighting:

“During their time together, it is clear that George and Marie have come to understand, respect and love each other dearly and they are today publicly declaring that they wish to spend the rest of their lives together.

In a partnership of equals, such as the one which George and Marie have, each partner cares for the other through both the difficult times and the good times.

They will share the laughter and tears, the joy and the sadness, as well as the companionship and tranquillity of simply being together. But at the same time, they will continue to respect each other’s individuality and uniqueness and this is represented by the two flames.”

“George and Marie will now light their third candle from the flames of their individual candles to signify their union in marriage.”

[Back to Wedding Symbolism]